So you’ve decided to start using satellite data but have absolutely no idea what kind of image has the information you need? Our first tip is: figure out what spatial resolution is good for you.

What Is Spatial Resolution Of Satellite Imagery Data?

Spatial resolution refers to the size of one pixel on the ground. A pixel is that smallest ‘dot’ that makes up an optical satellite image and basically determines how detailed a picture is. Landsat data, for example, has a 30m resolution, meaning each pixel stands for a 30m x 30m area on the ground. It’s considered a medium-resolution image, which can cover an entire city area alone, but the level of detail isn’t fine enough to distinguish individual objects like houses or cars.

This subdivision into low, medium and high is provisional, as imaging technology advances all the time. What was considered high resolution back in the 80s ‒ for example, NASA satellite data from Landsat with its 60m per pixel ‒ has become low in today’s standards. The finest resolution as of now is 30cm provided by very high-resolution commercial satellites.

To illustrate the difference between various resolutions of satellite image data, look at these two satellite images of Venice. The left one is a 50cm high-resolution image from Pleiades satellite (Airbus); it allows to clearly see the buildings, small boats, narrow streets, and unfortunately, you have to pay for it. On the right is a 10m per pixel medium-resolution image from Sentinel-2 that provides a much coarser view, but ‒ just like any open source satellite data ‒ it’s available free of charge.

There’s a third option when it comes to working with satellite image data: satellite maps. There are free Google Maps and Bing Maps providing a high-resolution map of the entire world rather than a separate satellite image of a small area. You don’t need to pay for fine resolution or download free images one by one from a satellite data base. But can you really get any useful information from Google Maps other than just a close view of the location at one (unknown) point of time?

To help you figure out which of these options can cover your needs, let’s look at all the pros and cons of each.

There’s a wealth of open source satellite imagery with global coverage available today at no charge. ESA’s Sentinel data and NASA Landsat data are the two most widely used sources of Earth observations that provide a historical look back up to 40 years and spectral bands variety applicable in nearly everything you can put your mind to: from crop analysis to fire detection to glacier monitoring.

The most valuable thing about low- and medium-resolution data are the spectral bands contained in every image. Various combinations of these bands and spectral indexes calculated on their basis allow us to unlock the ‘hidden’ information about objects or features that can’t be seen.

Compare the information we get from a 50cm SuperView-1 natural color image (above), and 30m Landsat 8 color-infrared image (below). Black areas on a high-resolution image may be mistaken for deep waters or bare soil, but the less detailed color infrared reveals that those are, in fact, forest trees.

2000s are not the oldest times you can visit with free satellite images: thanks to the longest-running Landsat mission anyone can travel 46 years back. LandViewer offers access to various historical imagery starting from 1982 up till now and provides value-added services for extracting insights from old images such as Time Series analysis, Time-lapse animation.

You can see cities before they’ve grown, glaciers before meltdown, lakes and water bodies that don’t exist anymore.

Although free low- and medium-resolution satellite data certainly has a lot of advantages, they all come at the expense of image quality. With this imagery, only general features such as bridges, waterways, street patterns can be identified. The best resolution comes from Sentinel satellite data : 10 to 20m per pixel, which is quite enough for monitoring crop growth or forest clearing. But you won’t be able to distinguish your own house; even a construction as large as Colosseum will appear as a small dot.

Here are some links that will lead you directly to low and medium-resolution images:

Using satellite monitoring for remote fields management in one platform!

The best thing about commercial high-resolution satellite data is that small objects such as individual houses or cars can be easily identified. The resolution ability of 8 datasets available in LandViewer varies between 5m (SPOT 5) and 40cm (Kompsat-3A). Such a level of detail enables high precision in urban studies, detailed mapping, open mines and dumpsites monitoring, 3D city modeling, and else.

Below is a 50cm resolution image from SuperView-1. It shows the ministry buildings at the heart of Brasília’s downtown. It’s possible to zoom in to see the cars driving along the famous Monumental Axis avenue.

This ability has radically changed the disaster response and mitigation: whenever a natural or man-made disaster occurs, high-resolution satellites are the first to provide a remote detailed view of the damaged territories inaccessible from the ground.

This feature is coming soon to LandViewer, so you will be able to send commercial satellites to your area of interest for taking highly detailed images.

Commercial satellites are carrying the most advanced technology sensors, which require large investments. That’s why satellite image data of high resolution isn’t cheap. To make it more affordable, reselling platforms like LandViewer let customers pay only for the part of an image that covers the selected area. This is a great value for money option considering the price one would pay for an entire image.

Generally speaking, the better the resolution, the less total ground area can be seen in an image. That’s why high-resolution satellite data is more suitable for small-scale monitoring or analysis. It would take at least 4 images from Pleiades-1, Kompsat-3 or SuperView-1 satellites to cover an area the size of London city. A single Landsat 8 image, in its turn, can capture a territory equal to 25 London cities.

With any satellite data , there’s always a risk that an image will be of little to no use due to cloudiness. But medium-resolution satellites, which follow the consistent path and revisit areas at regular intervals, provide you with a better chance of finding a good image. Commercial satellites are sometimes tasked by customers or pointed to collect specific areas instead of areas directly in their route; this means you could end up waiting for an image that won’t be collected at all.

Read more about the high-resolution satellite imagery, or start searching for an image right away!

Google Maps is a free of charge service, and it takes as little as a stable Internet connection to get access to a satellite map of the entire world.

If you want to get a satellite view of your house, school, park, or any other small-scale object on Earth, Google Maps is the right kind of place. It provides a highly detailed satellite map of the globe that is comprised of various high-resolution datasets (aerial photos, commercial high-resolution data, open source imagery, etc.). You can zoom in really close to distinguish buildings, vehicles, and trees. 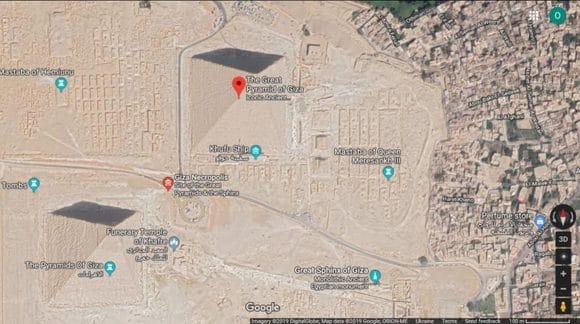 The data used to create that specific part of Google Maps is always given at the page bottom. For instance, this updated 2019’ view of The Great Pyramids of Giza was created using DigitalGlobe imagery, Map data, and ORION-ME data.

With Google Maps, you can never know which day or month you’re looking at. The only information available is the year when this part of Google Maps was updated. It’s definitely not enough for performing a reliable analysis of an object or event, to see changes, progress, or simply a current state. Say, a farmer wants to check whether the crops have survived the flooding: Google Maps won’t give this information as it probably won’t get updated until a few months later or more.

Google Maps can neither be used for remote sensing analysis of any kind. A cut-out from the satellite map is a mere photo, which doesn’t contain the various spectral bands of multispectral low-, medium- or high-resolution satellite data that can be found in LandViewer.

To sum it up, the first thing you should do is figure out what exactly you need satellite data for. If you’re curious to see how the Eiffel Tower or your neighbor’s backyard looks from space, choose Google Maps and explore the still world in fine detail. If your goal is to study, map, monitor objects and changes in time, go to LandViewer and get a satellite image. For free-of-charge observations of territories at a large scale (country or city scale), a low- or medium-resolution image will be enough. In case you need to zoom in as close as to see a house or a car, consider spending some money on a high-resolution image.