Urban planning covers both the development of open land sites and the renovation of developed parts of the city, in particular, data collection and analysis, prediction, design, strategic planning, economic models and social research. Increasingly, the GIS technology has been applied to map the urban system and to project the consequences of changes.

Currently, lots of cities are developing, therefore there’s a growing demand for up-to-date land topography and land use maps, as well as other spatial data products. These maps are essential to land use development, natural resource management and engineering applications.

Many projects of urban sites planning are based on multi-source remote sensing techniques which are able to ensure best quality data over wide areas. Mapping applications within urban environments are focused on using the latest and least time-consuming approaches to provide the highest product quality at a lower cost.

Medium resolution satellite data can be applied to perform global spatial queries within urban environments. The wide area coverage allows for vast geographical areas to be covered with a single scene making it a cost-effective assessment tool. Landsat data enables decision-makers to assess the rate of informal settlement occurrence as compared to the rate of new housing development expansion as well as to visualize the patterns of informal settlement distribution in relation to new development projects being delivered. Moreover, it makes it possible to carry out land use trends analysis and identify areas of encroachment and environmental sensitivity.

Suppose there is a dataset, covering all the settlements of the globe. The settlement details contain boundaries, name, population, administrative arrangement, and the information is constantly updating, saving the previous data therewith. The key benefits of such dataset availability are as follows:

We believe the best place to organize such data would be the OpenStreetMap. Using OSM history and changesets databases, researchers and developers would have access to all the data to track the history of humanity’s progress. The EOS Vision team has challenged itself to lead the way in developing the Global Settlements Dataset.

The given case focuses on describing the process of discovering potential settlements in Argentina. For this purpose our team has analyzed OpenStreetMap data, VIIRS night imagery, MaxMind World Cities [license], and created a ready-to-use dataset to launch the targeted campaign for adding settlements’ boundaries to OSM. The procedure is as follows:

The project to search for potential settlements missing on OpenStreetMap is based on the data from the spacecraft VIIRS as the night mode enables to capture objects emitting light stiffy accurate. The spatial resolution of the sensor is 750 m. The satellite image pre-processing procedure comprises 2 stages: 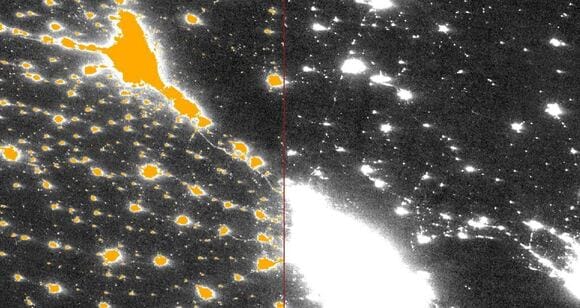 The image pre-processing was made with the gdal (gdal_calc and gdal_polygonize) tools.

The Argentine populated areas are tagged relation [“admin_level” = ”8”] on the map. For the further workflow, the data is uploaded via overpass-turbo.eu. 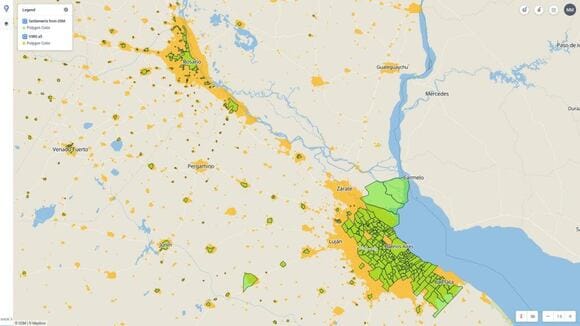 Elimination of the intersection

The final mask showed two large light source clusters, which turned to be not the settlements. In the process of analysis, we discovered that the first source of the light was an oil derricks concentration cluster and the second presented a power plant.

The similar applies to settlements, we have eliminated intersections with the objects, having the following tags: 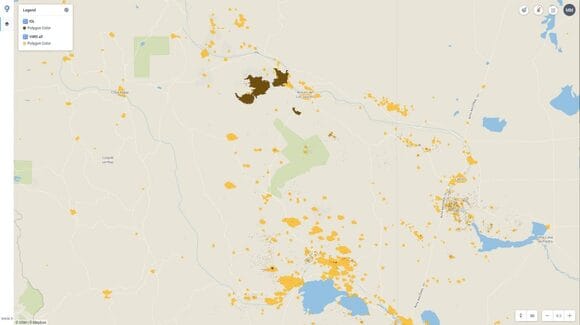 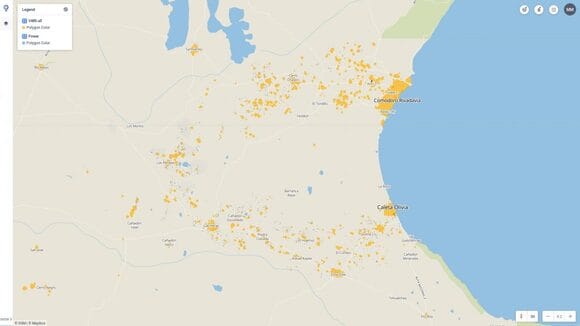 As the project progresses, it has been found that many settlements are mapped partially, meaning areas are mapped without the cities’ boundaries. We have specified such cases in the project. 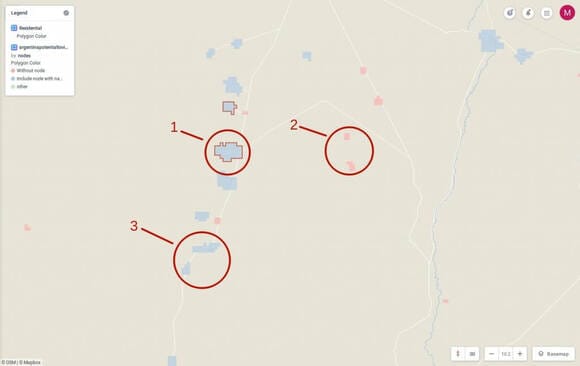 Blue color means that the settlement, obtained on the basis of the satellite image has a point with the name of the city in OpenStreetMap. Most likely that point is a real populated area

Red color means a potential settlement that does not intersect with any object from OpenStreetMap.

Red outline means that the object has got intersections with residential areas [“land use” = ”residential”], but at the same time, no borders.

We included the settlements’ points from the Kaggle.com, and excluded all the objects within a radius of 450 m from the points from OpenStreetMap.

Below there is an example of how to apply the project data in searching settlements and drawing on OpenStreetMap.

There is a wasteland on the map: 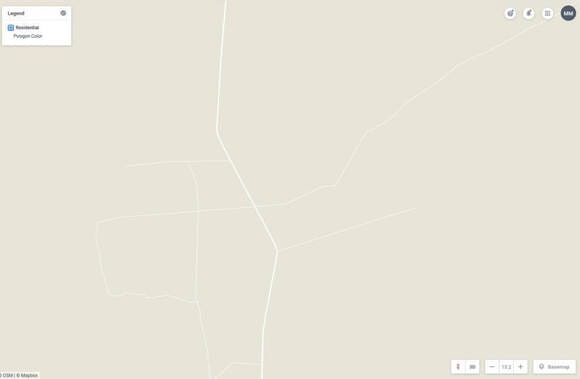 In this area we have also found a potential area settlement and the point from Kaggle.com 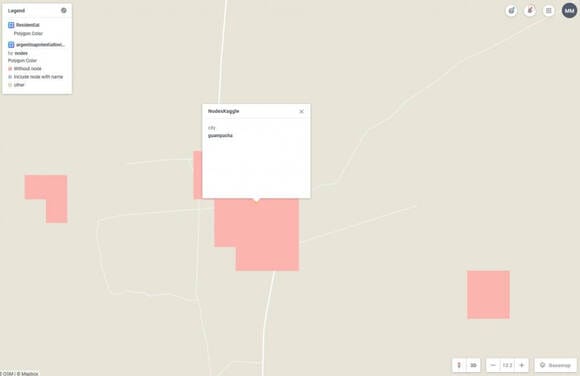 Having loaded the WMS layer, obtained from Sentinel-2 satellite onto the given territory, one can see the tested area really contains the settlement

The EOS Vision team is focused on analyzing existing data in OpenStreetMap as well as other global open data projects. Currently, we are making the dataset, containing potential settlements in South America and are heading to the global coverage.
GlobalSettlementsDataset is a huge contribution to the open data concept development.

All the data would be published in a short run. We will keep you updated!

Find and fast-order imagery from 10 commercial collections with resolution up to 40 cm/pixel!