Latest satellite imagery is the most sought-after data right now, but historical satellite images are the ones you need to see how a site has changed over time. And the good news is that millions of archived satellite images of nearly any place on Earth can be accessed free on the Internet.

Timeline Of Earth Observation Satellites – Over 40 Years Of Satellite Data

The biggest contributor to the collection of historical satellite images which we can access today is by no means the Landsat program. It is the longest-running Earth observation mission to date, which has been continuously providing global imagery for 46 years now.

The first Landsat satellite was launched in 1972, and it’s the oldest date you can go back to see how Earth looked like back then. Since that time, six more Landsat satellites were placed on orbit by joint USGS and NASA’s efforts to capture imagery once every 16 days on average and enable land cover and land use observations from space non-stop.

Landsat satellites have been continuously collecting global imagery every two weeks for the past 46 years.

More satellites eventually joined the Landsats to increase the scope, variability and frequency of open public data about land, vegetation and water bodies. They are Sentinel-1 and Sentinel-2 missions within ESA’s Copernicus programme, Terra and Aqua MODIS by NASA and USGS, CBERS satellites, etc.

Here’s some infographic so you don’t get lost in the wealth of satellite missions and can easily figure out which satellite to get old satellite images from. 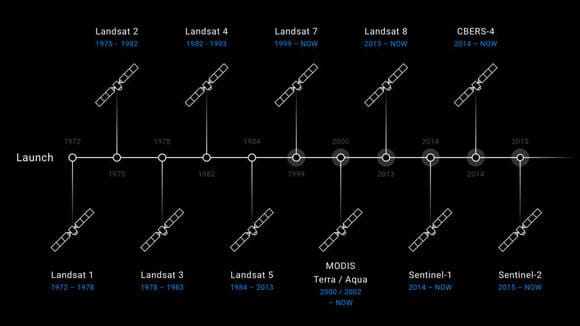 Where Can You Find Free Historical Satellite Images

LandViewer is one of the go-to online platforms for getting historical satellite images starting from 1982. It enables quick image search by location and date across nearly 10 open-source imagery collections, and free download.

The available collections feature imagery of low and medium spatial resolution ranging between 60 to 10 meters/pixel, global coverage, and revisiting periods from 16 days down to several days.

If you’re looking for old satellite images of an area dated before 1982, you can go to USGS Earth Explorer and comb through Landsat 1, Landsat 2 or Landsat 3 datasets that aren’t available in LandViewer.

Compare The Present And The Past

Nobody can turn back time to prevent the devastating events, such as tornadoes, volcano eruptions, hurricanes. But archived satellite images can provide an interesting look at the changes that occurred once you compare them to the recent images of same place. To do so, you can use the Comparison slider in LandViewer and get an interactive map of event (which can also be embedded on website or shared on social media).

Comparing images can be useful in numerous industries: urban growth, mine development, construction monitoring, land use, environmental issues and many more.

With historical satellite images you can travel in time and observe changes anywhere on planet over a span of several years or even decades. And the Time-lapse animation tool will transform still observations into animated GIFs or videos. Researchers can get insights into global issues such as ice sheet melting, deforestation, river degradation, water pollution, urban growth, and other effects of human activities re-shaping the world dramatically.

Agriculture is currently one of the industries leveraging the power of historical satellite images to the crop growers’ benefit. Access to old satellite images of fields collected during the past growing seasons allows to generate NDVI time series and observe the crop growth dynamics, identify growth trends and predict future yields.

LandViewer users can perform such analysis automatically using the Time Series analysis tool, which will quickly process cloud-free satellite data for the selected period up to 10 years back and build a graph that can be saved for further use.