The Objective Of Change Detection

Change Detection is designed to compare the spatial representation of two points in time and measure changes caused by differences in the variables of interest.

Change detection for GIS is a process that measures how the attributes of a particular area have changed between two or more time periods, comparing two satellite images taken at different times.

How The Analysis Works

In GIS, Change Detection Analysis comprises a wide range of approaches used to identify, display, and calculate the differences between images of the same area at different times or under different conditions. In LandViewer, Change Detection offers a straightforward approach to measuring changes in the index values between a pair of images that represent the initial state and final state. It serves a reliable change detection calculator.

The Change Detection algorithm is as follows – the difference is computed by subtracting the initial state image from the final state image (that is, final – initial), and the classes are defined by change thresholds.

For example, if we have two NDVI values and the initial one is higher than the final one, we’ll get a negative value. Therefore we see that vegetation at this point became worse. Positive value indicates the higher vegetation at the observation point.

Change detection has been widely used to assess deforestation, urban growth, the impact of natural disasters and to evaluate the typical landscape change over time especially in the areas with a rich amount of biodiversity and highly productive ecosystem.

Many types of natural disasters can adversely affect vegetation communities including – but not limited to – floods, hurricanes, and severe windstorms, drought, insect infestation, and fire, resulting in vegetation structural damage, stress or mortality.

Description: Intensive ground and aerial control operations continued during May against widespread infestations of hopper and adult groups, bands and swarms in Saudi Arabia and Iran that developed from two generations of unprecedented spring breeding. The ground and aerial disinsection measures were taken in Saudi Arabia against numerous groups of insects between Riyadh and Hail, near Tabuk, Wadi ad-Dawasir, Abha and to the south of Kuwait. The teams have treated 36 580 hectares on June 1-15. 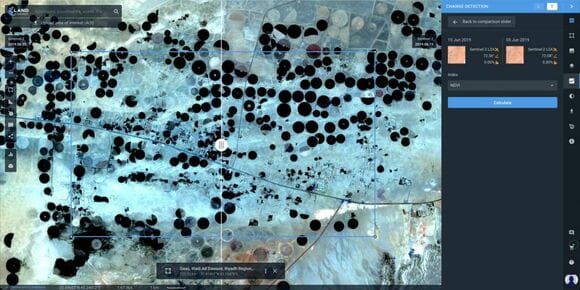 Result: The images were taken with just 10 days interval and reflect the fields where signs of vegetation are still present, however the field structure looks uneven which indicates the presence of the locust. The red areas are most likely to show that the harvesting was done. 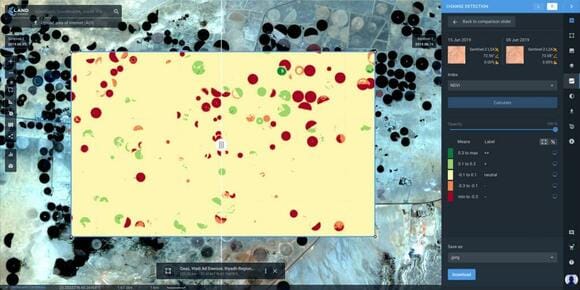 The Legend shows the ranges of NDVI values.

Description: According to mass media, India is suffering from one of the most destructive floods in the past 100 years due to heavy rains which started in mid August and lasted for two weeks. Many regions, thousands of buildings and facilities were flooded.
In Kerala state, which suffered the most, monsoons took the lives of at least 400 people. 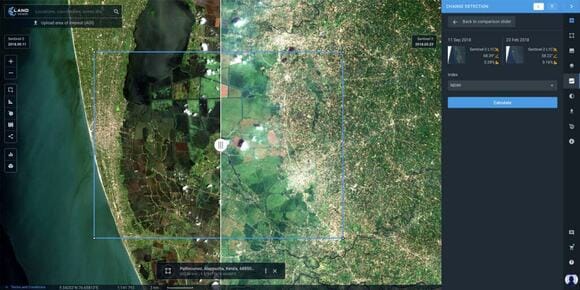 In addition, damage information can then be correlated with a GIS database of property cost, providing a financial impact assessment. To assess hurricane damage, for instance, the pre- and post-disaster digitized images are displayed concurrently and they are ideally topologically linked via objected-oriented programming such that a polygon drawn on one image to delineate an object will also appear around the same feature in the other image.

In LandViewer, both images are visualized on the map simultaneously and you are able to switch between them via Comparison slider. The outcome image is displayed over the originals ones. Once it is calculated, a slider to change the transparency of the difference layer appears on the map, and, below you can find the Change Detection Legend, displaying the index values range by different colors.

To start with Change Detection is easy – you just set your AOI, select two images from the same data source as well as one level of processing, dated from different periods of time. Then you need to implement the appropriate index and the tool will calculate the index change values and display it on the map.

Check LandViewer’s step-by-step user-guide to find the detailed instructions on how to work with Change Detection or feel free to email us at support@eos.com