This band combination is very helpful when you intend to pick out land from water. In the image, ice stands out as a vibrant magenta color, water appears in shades of blue and land in shades of green and orange.

The image, band NIR red is displayed in red, band SWIR1 is displayed in green, and Band red is displayed in blue. Generally, it reflects high in the visible band, however, there is lower reflectance in turbid water than in clearer water. In the Near Infrared and Mid-Infrared regions the increasingly absorption of light in the water makes it darker. This is reliant on the depth of the water and the wavelength. Increase of dissolved inorganic materials in the water bodies shifts the visible reflectance peak towards the brown region from the clearer water (blue region) of the spectrum.

This band combination provides a rendition where water appears in shades of blue and the land in shades orange and green this totally differentiate water from dry land. Urban features are magenta, white, or purple. Soils, sands, and minerals are displayed in a variety of colors. The almost complete absorption of NIR and SWIR 1 bands in water gives a highlighted sources of water and a well-defined coast lines within the image. Ice and Snow appear as a vibrant magenta, water is dark blue. Hot surfaces such as forest fires and volcano calderas saturate the Mid-IR bands and appear in shades of brown or yellow. One particular application for this combination is identifying the flooded areas. During seasons of little vegetation growth the combination should be substituted. Flooded areas should look very dark blue, compared with the natural color combination in which shallow flooded regions appear brown and are difficult to distinguish.

Each band in the combination plays a significant role in the image display.

NIR – water absorbs almost all light at the wavelength this makes the water bodies to appear very dark. The contrasts with the soil and vegetation bright reflectance makes it good band for the definition of water/land interface.

SWIR1 – This band is very sensitive to moisture and is therefore it is used to indicate and monitor the vegetation and soil moisture in the image.

Red – vegetation absorbs almost all the red light in the band. It is used to distinguish between soil and vegetation and also the vegetation health. 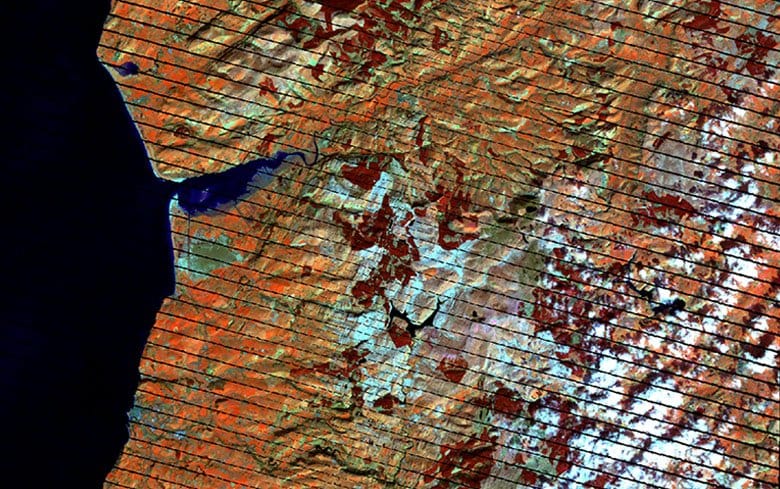