Terrace farming is an efficient and often the only solution for hilly farmlands. Yet, its advantages are multifold. The importance of terrace farming goes far beyond cultivating lands that are not suitable for agriculture otherwise. Furthermore, terrace farming prevents soil erosion and contributes to soil conservation. Nowadays, the method allows growing versatile crops, and its management is more comfortable with online agricultural software.

What Is Terrace Farming?

Terracing is an agricultural practice that suggests rearranging farmlands or turning hills into farmlands by constructing specific ridged platforms. These platforms are called terraces.

The essential (and distinguishing) feature of terracing agriculture is excavating and moving topsoil to form farmed areas and ridges. The trick is that water flows down to lower platforms when the upper ones are full. Thus, the amount of water is distributed more or less evenly, not just at the foot of the hill.

Why is terracing necessary? Typically, the purpose of terrace farming on slopes is to decrease water flows and prevent soil erosion. However, using it in the mountains is not the only option. Opposite to graduated step-like platforms, there are relatively level ones on gentle slopes or wavy lands, which shows that terracing applies for different field elevations.

Most Common Types Of Terraces

Farmed areas in agricultural terracing are either level or tilted, depending on the soil infiltration properties. If soil infiltration is sufficient, they are made level. Typically, outlets are not required, too.

The most popular terracing types in farming are broad-base, narrow-base, and grassed back-slope. Their choice depends on how steep the hill is. Correspondingly, not all the types imply farming of all terrace slopes.

The farming technique is suitable for the gentlest hills, and terrace cultivation embraces all the slopes. For this reason, they should suit machinery needs, and the terrace spacing is typically equal to the number of machinery swaths. Crossing the ridges is prohibited – the equipment is supposed to move between the terraces through designated passages. Broad-base terracing is applicable on slopes up to 8%. 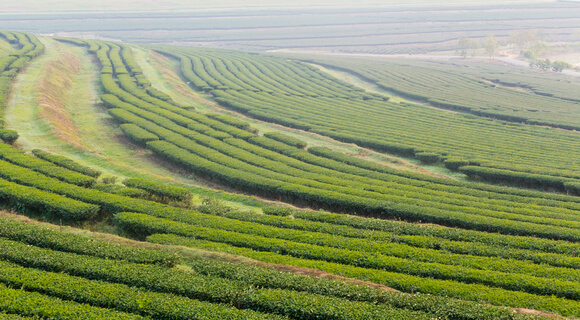 A terrace of this type is another example of perennial terracing, but in this case, permanent vegetation covers both the front and back sides. These parts are not cultivated. Like with the grassed back slope, the earth is usually moved from downhill. Yet, this is the steepest terracing type, requiring less amount of earth for platforms than others.

Terrace alignment depends on the slope steepness and the soil type. In particular, it is not suitable when lands are prone to sliding.

The commonly used terracing systems are bench, contour, and parallel terraces. Their names give an idea of their layout.

Bench systems in farming resemble benches or steps across the slope, with flat or almost flat farmed platforms arranged at regular intervals. Such regular arrangement is labor-consuming and suggests intensive soil disturbance. The slopes may consist of earth proper, covered with perennial vegetation, or may be fortified with stones.

Bench terracing in agriculture is most common for growing rice since bench terraces allow retaining water. For this reason, such a terracing layout is not suitable in the cases like: 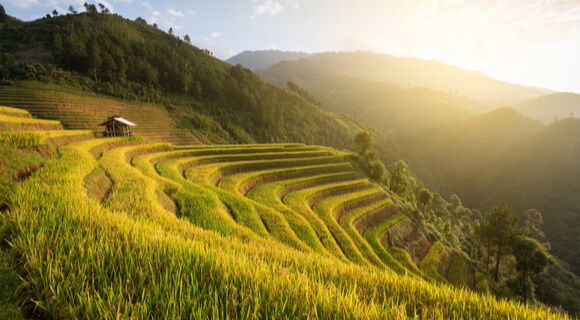 Like in contour strip farming, these terracing systems follow the relief contour. Terraces consist of point rows and grassed waterways. Even though such platforms require less input to arrange them, they are difficult for farming activities due to space irregularities.

Parallel constructions are the easiest for farming activities, so they should be kept as parallel as possible. If the slope does not allow that, they are built through land-leveling operations. It facilitates machinery movement, yet it is labor-, cost-, and time-consuming. In this regard, sometimes it will make sense not to treat those parts but leave them under perennial cover or as grass waterways.

Manage your fields with high-resolution satellite images for the most accurate and timely changes detection!

The technique is credited to ancient Incas, who developed the farming method of terracing in the Andes. Today, terracing is typical for mountainous rice paddies in Asia. Yet, terrace farming advantages make it a beneficial experience to borrow for any hilly terrains, both paddies or drylands, with various crops to grow.

So, why is terrace farming important in hilly areas? The benefits of terracing are quite numerous, which proves its importance for humans and nature. In particular, terrace agriculture:

However, there are relative disadvantages of terrace farming as well. Thus, certain challenges of terracing include:

What Is The Purpose Of Terrace Farming?

All terracing techniques allow farmers to retain or remove water and reduce the steepness of the hill. In fact, the purpose of terrace farming is to intercept water in a designated channel and remove it via constructed erosion-resistant ditches or subsurface pipe outlets. This proves the efficiency of terracing to stop erosion and contribute to soil conservation.

How Does Terrace Farming Help In Conserving Soil?

Terracing helps retain soil cover and fertility since water flows do not wash off the topsoil and nutrients.

So, what is terracing in soil conservation?

Farming on a terrace is an efficient soil conservation practice. However, it requires regular inspection and maintenance at the same time. Thus, in efficient terrace farming, it is essential to check the ridges and grass cover, improving where necessary. Another issue of the terracing practice is the sedimentation of channels, which is resolved with cleaning and planting buffer strips. Also, the outlets and pipes should be clean and free from vegetation residue and particles that may block them. 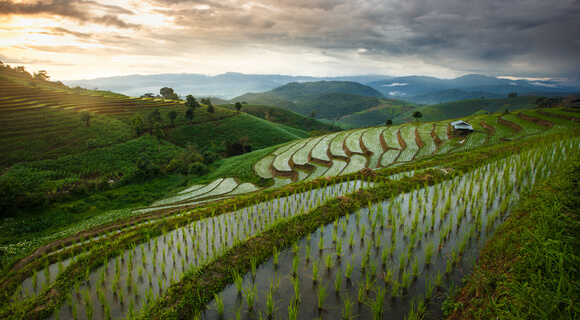 Since water comes down through designated outlets, terracing prevents the formation of soil-eroding rills. How does terrace farming prevent soil erosion? In fact, terraces break the slope, splitting one big slope into several smaller ones, making it less steep, and the force of water due to gravitation is less destructive.

However, this is not the only way of terracing to prevent soil erosion. Additionally, vegetation on front and back slopes mitigates the risk of destruction by water and wind.

If a farmer sees visible signs of erosion or has decreased yields season by season, and the field elevation is uneven (sloped), it is worth opting for terracing to stop erosion and boost yields. With EOS Crop Monitoring, farmers can get data on field elevation and how the productivity of the field has changed over time. It shows the trend of how the vegetation was developing over a selected period. With this information, a farmer can decide on productivity zones of the field and treat each zone differently (depending on the needs).

In fact, the functionality of EOS Crop Monitoring is quite comprehensive, so after implementing a terracing system, it will help monitor the state of crops with its soil moisture data, vegetation indices analytics, weather forecasts, historical insights, and more.

The choice of species depends on their productivity in highlands and sensitivity to waterlogging since terraces tend to accumulate moisture. For example, rice grows in paddies, but its productivity drops on elevations higher than 375 m. 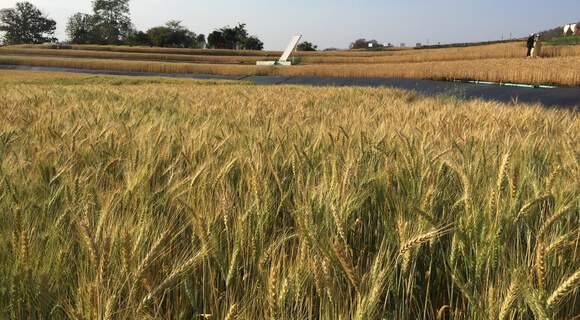 Prevention or reduction of soil erosion, as well as soil conservation by terracing, allow using the terraced farmlands in the long run. It attests to the essential role of terracing in sustainable agriculture.

Even though terrace layout demands certain inputs and efforts, the advantages of terracing make it a promising practice. Modern terrace farming becomes easier to implement with satellite monitoring and online agricultural tools. EOS Crop Monitoring can become a reliable farming assistant in this regard, among the many more product capabilities. If you have any questions regarding our product, you are welcome to reach us via sales@eosda.com, and our team of experts will help you.

request a demo
try now
Don't miss the special offer: sign up now and get a gift!
Learn more about types of agriculture:
Media