Alongside potassium and phosphorus, nitrogen is among the top 3 vital nutrients for crop development, being responsible for the process of photosynthesis and chlorophyll contents. Nitrogen fixation in soil is important for agriculture because even though dry atmospheric air is 78% nitrogen, it is not the nitrogen that plants can consume right away. Its saturation in a digestible form is a necessary condition for crop health. However, fertilization is not the only solution – biological nitrogen fixation is a more economic, ecological, and even profitable option. It is possible thanks to nitrogen-fixing organisms and crops.

What Is Nitrogen Fixation?

Nitrogen fixation is a process that implies the transformation of the relatively non-reactive atmospheric N2 into its more reactive compounds (nitrates, nitrites, or ammonia). Why is nitrogen fixation important? Such reactive forms are suitable for crops and support their growth. About 90% of natural N fixation on our planet is biotic and occurs thanks to soil microorganisms. Abiotic natural inducers are lightning and UV rays. Alternatively, N can be fixed with electrical equipment or industrially.

Chemically, N fixation is splitting the triple bond in N2 and reducing it to ammonia (NH3) or ammonium (NH4+). The process is sometimes referred to as dinitrogen fixation, considering the two atoms in the N2 formula.

An N-fixing crop is a natural way to provide plant-adjusted N without any industrial harm to nature. Using them in crop rotation allows nitrogen fixation for succeeding plants. Another successful practice is to use nitrogen-fixing plant species in intercropping. 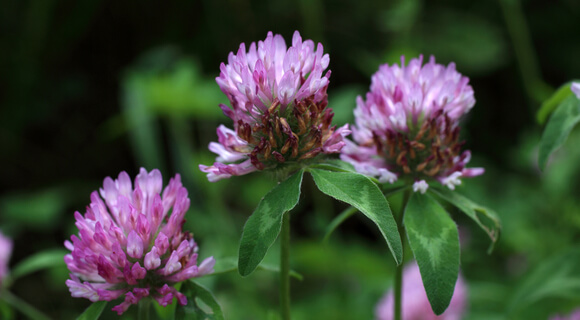 Clovers, vetches, and peas are nitrogen-fixing plants used by farmers worldwide, and in the US Southern Great Plains in particular.

Clover crop for nitrogen-fixing is used in spring or fall. Apart from the aforementioned practical advantages, blooming clovers are a spectacular view. Besides, new resilient white clovers by Texas A&M University resist rusts and droughts. Clovers may survive mild winters but are risky for severe ones.

Vetches are winter-hardly and thus are suitable for cooler seasons. Hairy vetch is the strongest type that is a good nitrogen-fixing winter cover crop. It is planted in early fall for the roots to establish before the first frosts.

Peas or beans can be used as a summer nitrogen-fixing cover crop or harvested for food. Both ways, they enrich the soil with plant-suitable N. Southern peas prefer warm seasons and are sown when the soil temperature reaches 60F.

The list of nitrogen-fixing plants for agriculture is quite versatile and includes, among others: 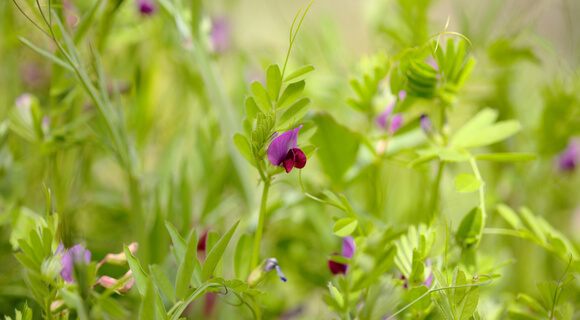 Value And Amounts Of Nitrogen Fixation In Leguminous Crops

The value of nitrogen-fixing crops is understood through the correlation of N fixed by legumes and costs of chemical fertilizers. It becomes even more obvious with the World Bank estimations of fertilizer prices to grow in 2021. So, the question arises, how much N nitrogen-fixing plants can actually fix. In its turn, their capacity will help define the most productive crops for nitrogen fixation.

The quantity of nitrogen fixation in plants is different. It depends on multiple factors:

The table below shows the nitrogen-fixing potential of some legumes, from highest to lowest.

What Are Nitrogen-Fixing Bacteria?

What Do Nitrogen Fixing Bacteria Do?

Nitrogen-fixing bacteria convert gaseous N from the air to inorganic compounds. Even though the role of legumes in N fixation is undeniable, the task is too hard for them alone. In fact, the fixation process occurs thanks to the symbiosis of legumes and nitrogen-fixing bacteria. It is common for Rhizobium, colonizing legume roots. However, their symbiosis is not the only option: there exist free-living and associated N fixation organisms as well. 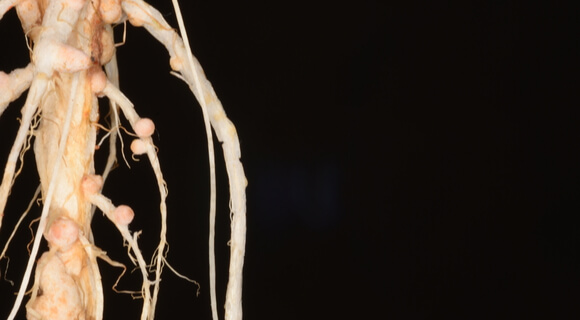 Why Are Nitrogen Fixing Bacteria Important To Plants?

The role of nitrogen-fixing bacteria is to supply plants with the vital nutrient that they cannot obtain from the air themselves. Nitrogen-fixing microorganisms do what crops can’t – get assimilative N for them. Bacteria take it from the air as a gas and release it to the soil, primarily as ammonia. It is the only suitable option for plants because they can consume N only from the soil and only as nitrogenous inorganic compounds, which explains the importance of nitrogen fixation.

N-fixing bacteria provide crops with ready-to-use N that they need as part of chlorophyll molecules. Chlorophyll is critical for photosynthesis – to transform the energy of sunlight into chemical energy. Simply put, plants need it to get food. Also, they require N as part of amino acids to build proteins that participate in metabolism and energy storage. A lack of N fixation leads to food deficiency, which results in vegetation yellowing, thinning, withering, overall growth delay, and decay.

Nitrogen-fixing bacteria in the soil saturate it with inorganic N-containing compounds, which are necessary crop nutrients. When fixation bacteria die, the accumulated N in their biomass is released into the soil. This way, they boost soil fertility naturally, allowing farmers to save on synthetic fertilizers. 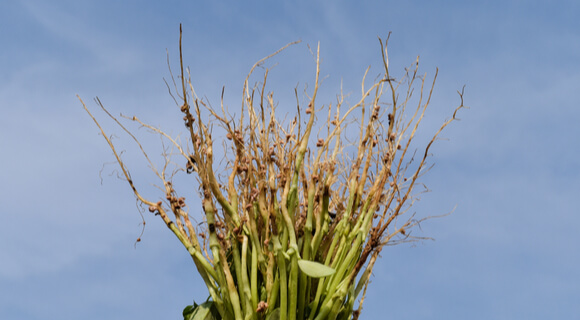 How Do Nitrogen Fixing Bacteria Help Cycle Nitrogen Through Ecosystems?

N-fixing bacteria participate in N-circulation through the ecosystems by catching it from the air and adjusting for plant needs (fixation of nitrogen). Then, crops use it for growth (N-assimilation). Further on, when plants and bacteria die, decomposers split their nitrogenous compounds and release ammonia or ammonium (ammonification). Nitrifying bacteria convert ammonia into nitrates (nitrification), either consumed by plants or denitrifying bacteria. The latter turn nitrates into free atmospheric nitrogen that comes back to the air (denitrification).

Even though N is important for plants, its excess fixation is harmful. For this reason, crop rotation of N-fixers and non-fixers is necessary for the optimal balance.

N-Fixing Bacteria By Type Of Interaction With Plants

There distinguished several types of N-fixing bacteria, depending on how they coexist with crops (basically, if they dwell on/inside the plant or not – endophytes vs. exophytes). Thus, there are symbiotic nitrogen-fixing bacteria, associative, and free-living ones. However, it does not mean that the same type is either symbiotic or free-living. Therefore, rhizobacteria can reside either on/inside plants or in the rhizosphere. The table below features nitrogen-fixing bacteria types and their main characteristics.

Symbiotic N-fixing bacteria habituate on the host’s roots, forming nodules, accumulating atmospheric N2 in them, and turning it into ammonia. The host uses it for growth and releases it to the soil from the broken nodules after it dies. N fixation symbionts don’t do the ‘favor’ for nothing, though. Since any symbiosis suggests a win-win situation, the bacteria feed with plant-produced carbohydrates (sugars) and take carbon.

So, even though technically, their N fixation symbiosis is defined as infection, both of the parties benefit from it pretty well. For this reason, such a relationship is also called mutualism.

The relationship between legumes and nitrogen-fixing bacteria Rhizobium is a typical case of N fixation. Furthermore, it is not the sole advantage. This genus of nitrogen-fixing bacteria in legumes improves access to other nutrients and boosts the crop’s resistance to pathogens, pests, and abiotic stresses. This mutually beneficial interaction is favorable to farmers too, illustrated with the convincing estimated N fixation rates of 50–465 kg N ha−1 yr−1.

Normally, N-fixing Rhizobium exists in symbiosis. However, free-living ones might occur if they can’t find a suitable host. Even in isolation, they still can participate in N fixation by synthesizing nitrogenase and growing solely on N2 from the air. 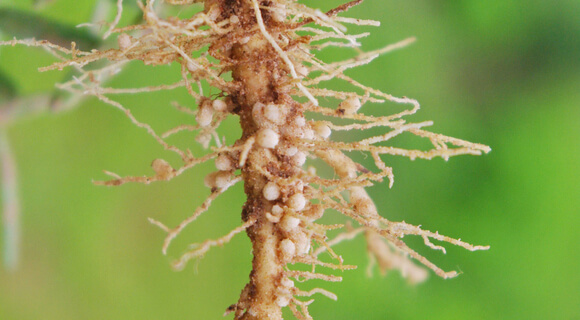 Associative symbiosis is typical for cereals and free-living N-fixing bacteria that may adhere to the host roots. This refers to such genera as Azospirillum, Glucenobacter, Acetobacter, Herbaspirillum, Azoarcus. They are closely associated with wheat, rice, corn, sugarcane, barley, sorghum, Setaria, biofuel crops like Pennisetum, and more.

Grains don’t fix N in nodules like legumes but rely on the nutrient availability in the soil, i.e. its fixation. In their turn, bacteria utilize the atmospheric N for their needs and ‘share’ it with the host crop.

Most N fixation bacteria reside on roots, but some aggressive types like Herbaspirillum may penetrate the entire plant. These microorganisms may enhance crop growth and boost yields, which is particularly important in poor soils.

Free-living N-fixing bacteria are also a source of N for crops. For example, rice producers add aquatic Azolla ferns to their fields as green manure, and Azolla serves as a habitat to Anabaena Azolla (cyanobacteria type), famous for N-fixing properties.

Cyanobacteria can live either symbiotically or freely and exist in moist soils and inland aquatic bodies. This type merges unique properties: it is classified as bacteria, though it resembles algae. In fact, it contains chlorophyll, meaning cyanobacteria are phototrophs (like plants). But unlike plants, they can fix N2.

Apart from the aforementioned chlorophyll importance for the process of photosynthesis, its recognizable feature is providing green color to plants, which allows assessing the crop state. Vibrant deep green is typical for healthy plants that contain chlorophyll in abundance. On the contrary, yellowing (chlorosis) and pale green signal chlorophyll deficiency and plant health deviations, possibly due to a lack of nitrogen fixation. Besides, the pigment content in young crops is higher than in mature ones.

Heavy rainfalls may also provoke N drops that a farmer can track on Crop Monitoring alongside ReCl index chart. Also, the platform provides weather forecasts for up to 14 days, which allows scheduling field activities and predicting the crop state. ReCl is efficient at the state of active plant development and is not used at the harvesting time. To get a more precise picture of crops in a field, combine the ReCl index with other vegetative indices available on Crop Monitoring – NDVI, MSAVI, and NDRE.

That’s why it’s important to test a field for N-content and keep the optimal balance by its fixation, considering the current level in soil and all the fertigation methods planned. The optimal level of N is specific for each crop, so its lacking amount will also differ.

Intensive agriculture heavily exploits synthetic fertilization for N fixation, harmful to the environment. Contrary, Biological N fixation proves to be friendly both to farmers and nature. It is efficiently implemented through N-fixing crop species and certain microbial balance, contributing to organic farming. Thus, low maintenance nitrogen-fixing cover crop is a significant source of N itself, not to mention the other above-listed advantages.

As for non-legumes, N-fixing bacteria inoculants are an efficient solution. They allow farmers to get the job done without artificial means. Furthermore, microorganisms’ efficiency goes far beyond N fixation since they improve soil conditions, tackling heavy metals in particular.

Symbiotic nitrogen fixation is reported to be more efficient than free-living ones since they release the nutrient to the host plant directly, sparing it the competition with other N-consumers. In this regard, N fixation intracellular microorganisms (e.g., Herbaspirillum or Azoarcus) are the strongest.

Keeping the optimal N fixation balance with proper monitoring is the key to success. Crop Monitoring is farmers’ reliable online partner, ready to track the situation 24/7.

try now
Don't miss the special offer: sign up now and get a gift!

Strip Cropping Fields In Agriculture: Why & How To Use

Satellite Monitoring In Action: As Farmers See It

An interview with a farmer from Argentina about the company’s experience of satellite technology implementation. Main reasons and benefits of switching to precision agriculture techniques.

GIS mapping is a widely used technology for geospatial data analysis and visualization. Take a closer look at the modern practice of interactive mapping for better decision-making.

A farmer’s case. The CEO of a farming digital platform shares the experience of precision farming technology implementation in Sub-Saharan countries. The main obstacles and advantages of the adoption.

Soil Salinization Causes & How To Prevent And Manage It

The launch of own first satellite constellation will allow EOSDA establishing a full satellite data production vertical and increasing the accessibility and accuracy of its satellite monitoring features.