Nitrogen deficiency significantly hinders crop growth. Thus, noticing and solving the problem on time helps in preventing crop losses. It is also useful to know what causes nitrogen deficiency in plants and avoid that correspondingly.

Early problem detection facilitates a successful outcome. Plants with nitrogen deficiency are thin, pale, subject to chlorosis, and produce poor fruits. By knowing how to control nitrogen deficiency in plants with organic and chemical methods, farmers can save yields. Remote sensing assists agriculturalists in identifying the problem early.

Why Nitrogen Is So Important For Crops Development

N is critical for vegetation: it is necessary for chlorophyll formation, which is vital for photosynthesis – basically the way for plants to get food. Besides, N is needed for the very plant development: it is a “building block” for amino acids, DNA, membrane proteins, enzymes, most coenzymes, auxins, cytokinins, and merely cells.

This is why it is important to prevent and manage nitrogen deficiency, slowing growth and reducing yields. On the contrary, nitrogen fixation and correct N supply ensure proper growth and full crop production capacity. Another essential drawback of N starvation is low protein levels in grains, e.g., corn and wheat.

What Causes Nitrogen Deficiency In Plants And Affects N Content In Soils?

Certain circumstances may provoke N drops. Being aware of them helps farmers keep the situation under control. The most typical nitrogen deficiency causes are as follows:

N starvation is ultimately critical after winter rains and snowmelt when new plants start growing and require N for their development.

Nitrogen deficiency in a plant can be recognized visually by specific color or shape changes in leaves and stem, forced early flowering, signs of necrosis, etc.

An N lack can be suspected pretty early since it can be visually noticed on leaves. The pale-green color and yellowing are among nitrogen deficiency symptoms in plants, alongside other nutrient deficiencies. Once noticed, the issue should be immediately addressed; otherwise, slight visual stages of nitrogen deficiency will inevitably get severe. 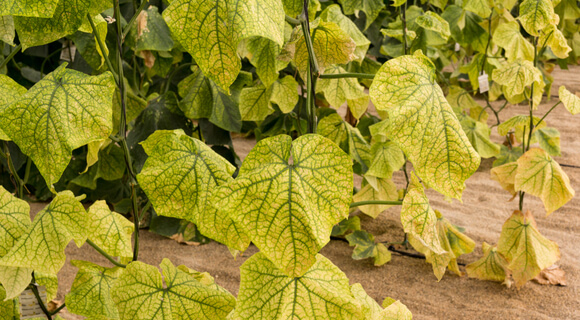 What Are The Symptoms Of Nitrogen Deficiency In Plants?

A lack of N means a lack of chlorophyll content in plants, and chlorophyll gives vegetation its vibrant green color. This is why nitrogen deficiency at early stages reveals in lighter greens. Then, a nitrogen deficiency causes green leaves to turn yellow, starting from older ones that fade prematurely. Further, the crop nutritional disorder leads to more serious symptoms like necrosis or wilt if not defeated timely.

The last stage of nitrogen deficiency in plants kills them and leads to a complete crop loss.

Yellowing (chlorosis) is not always an effect of nitrogen deficiency in plants since yellow leaves or plants are symptoms of other issues as well. A lack of K, Zn, S, Fe, or Mg or herbicide burns may also manifest yellowing. This is why, even though nitrogen deficiency usually causes plant leaves to turn yellow, the correct decision depends on the accurate problem cause identification.

Effects of nitrogen deficiency in plants differ depending on the crop nutritional disorder development.

Early signs of nitrogen deficiency start with slight discoloration in maturer leaves: they are lighter than usual. The entire plant looks pale and thin due to insufficient branching. Then, slight nitrogen deficiency changes with more severe symptoms:

Why does nitrogen deficiency kill plants? Apart from the inability to build cells and produce energy due to N starvation, crops become ultimately susceptible to water stress. In the attempt to find available N, roots spread around and develop big while shoots remain small and weak.

This happens because plants close their aqua pores in response to an N lack. Consequently, water and nutrient transportation to shoots is restricted.

Under severe nitrogen deficiency – without water, nutrition, cell-building materials, poor photosynthesis and no energy as a result – crops will eventually die.

Since corn seedlings don’t need much N at the beginning, corn nitrogen deficiency symptoms are typically not detected in the early season. Later on, they become visible through pale green or yellowish leaves and thin stems.

The specific nitrogen deficiency symptoms in corn are: 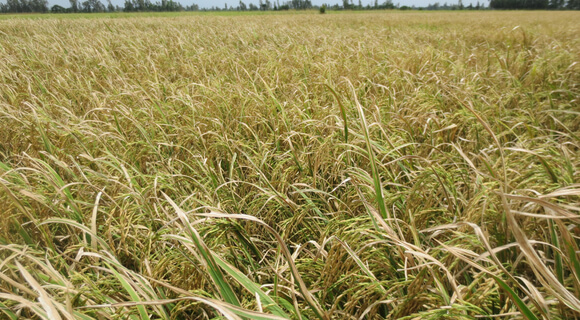 Legumes are known as N-fixation plants that provide N to other crops, yet leguminous soybeans may also suffer from N starvation. An insufficient N content in soybeans results in light-green vegetation and light-yellow foliage with green prominent veins (interveinal chlorosis), which leads to necrosis at the last stage of nitrogen deficiency in plants. Soybean leaves turn pale yellow, with a progression to brown.

Poor N supply makes cotton foliage light-green, with premature drying and shedding of older leaves. The entire plant is weak, and its overall growth is stunted.

The specific symptoms of nitrogen deficiency in cotton crops include: 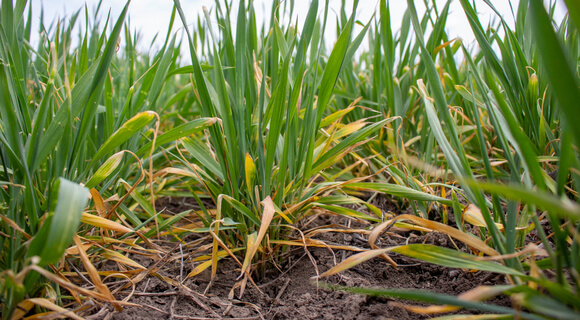 However, pale hues don’t necessarily mean nitrogen deficiency in plant leaves – in wheat, it may be due to a lack of K or Mo deficiencies or waterlogging. For this reason, it is important to mind not only disorder similarities but differences as well, alongside tissue testing and proper situation analysis.

Overwinter N starvation essentially decreases biomass and grain production in winter wheat. However, N supply at the stage of jointing under normal irrigation will amend the situation, boosting winter wheat growth and yields.

Correspondingly, agronomists should treat nitrogen deficiency and toxicity differently. It is necessary to add the nutrient to plants with an N lack, provided the soil pH rate is correct. With an N excess, it is possible to wash it away with weaker fertilizer solutions. 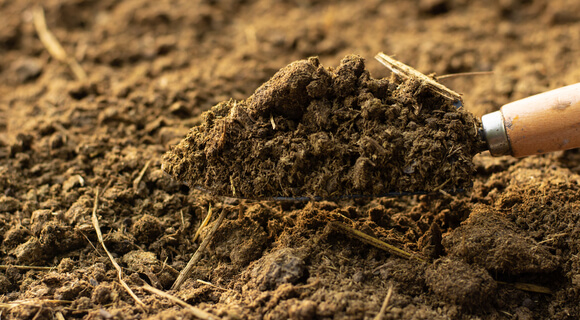 How To Fix Nitrogen Deficiency In Plants

When crops lack N, the nutrient can be supplied with organic or chemical methods. Prevention of nitrogen deficiency in crops tackles the issue beforehand.

Organic matter not only adds vital nutrients for plants but improves soil structure and helps retain soil moisture. Basic sources of N supply are widely used in organic farming and include:

There are many manures that can be a solution to nitrogen deficiency. N concentration in different manures varies. In particular, blood meal, groundnut husks and cake, coco peat are much richer in nitrogen compared to coal or wood ash and fresh poultry or green cowpea manure. Cover crops, crop rotation as well as intercropping help prevent nitrogen deficiency by growing legumes.

How long does it take to fix nitrogen deficiency in plants with organic methods? Organic manure needs time to decompose, so it is best to apply it after harvesting to have nourished soils before seeding. Besides, fresh manure should not be added after planting to avoid contamination or diseases and plant burning due to high N concentrations. The US Department of Agriculture recommends:

Most chemical fertilizers have a balanced formula with an indicated NPK ratio. The first number stands for N content. The higher the nutrient needs, the higher is the required amount.

How long does it take to fix nitrogen deficiency with chemical fertilizers? Chemical fertilization acts fast, giving a quick N rise in the soil. However, it leaks fast too, due to high N solubility. Thus, the best solution for nitrogen deficiency here will be multiple split applications before and throughout the whole cropping season eliminated at the stage of maturing and the harvesting time.

Prevention helps to avoid the issue of N starvation. The following measures will spare farmers the trouble of fixing severe nitrogen deficiency by addressing the issue in advance: 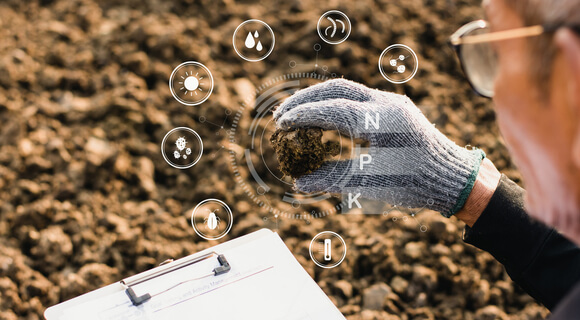 Apart from that, certain agricultural practices enrich the soil with nitrogen, and here is why:

When fixing nitrogen deficiency, it’s important to maintain a proper balance. Each crop has specific needs. When a balance is shifted to any side, it always affects yields adversely. In particular, N saturation decreases sweet potato yields. The surprising phenomenon can be explained by the fact that N boosts the shoot growth while sweet potatoes are grown for roots.

Signs of a plant recovering from nitrogen deficiency appear faster when soluble N is applied to foliage rather than roots. Nonetheless, the problem should still be resolved with fertilization or pH correction in the rhizome area because leaves can’t cover the nutrient deficiency of the entire plant. For this reason, foliage applications won’t solve the soil depletion issue and are justified only when the conditions for root applications are unfavorable.

How To Deal With Nitrogen Deficiency With EOS Crop Monitoring

Inspecting fields for visual signs of nitrogen deficiency by far is not the only way. Remote sensing and satellite-based analytics help monitor the crop state to notice the problem on time.

Weather conditions influence the nitrogen balance that crops need for healthy development. Either droughts or downpours adversely affect the nitrogen balance. EOS Crop Monitoring allows the farmers to be aware of weather anomalies by providing 14-day forecasts. With such data, the software facilitates the field activities planning to maintain the required level of nutrients for healthy crop growth, including but not limited to N. This will help eliminate nitrogen deficiency in plants.

Flooding or field waterlogging can occur not only due to heavy rains or relief specifics but also due to over-irrigation. The NDMI index shows the moisture content in crops, which helps estimate how wet the field is. With no recent rains but high NDMI values, there is a high probability of excessive irrigation events.

EOS Crop Monitoring also assists in carrying out all agricultural activities on each field or its separate zones. The Field activity log on the software is an excellent planner as well. Thus, if each activity is recorded in the system, the farmer will always know what has been done in the field and where exactly. It allows excluding the human factor of mistakenly repeated irrigation, fertigation, or any other agricultural activity, saving resources, and maintaining crop health.

Monitoring Crops Health At Active Stages Of Their Development

Despite yellowing and stunting, occurring due to various factors, N still directly impacts chlorophyll rates. This is why its reduced availability causes certain changes in crops. As plants highly need N at the active growth stages, one can notice the signs through ReCl index values. This vegetation index is particularly useful in crop monitoring during their active growth: low index values indicate deviations in vegetation development, possibly, because of nitrogen deficiency in plants.

Apart from the features above, EOS Crop Monitoring by EOSDA assists in tracking crop production from seeding to harvesting. Furthermore, the software allows agriculturalists to estimate the field productivity in general and in separate zones by analyzing performance in each cropping season. It facilitates efficient farm management in the long run.

Balance Is The Key

Nitrogen deficiency negatively affects crops, but too much nitrogen also reduces productivity. If nitrogen is low, crops suffer from chlorosis, starting in older foliage because plants reallocate N from mature to newer leaves. N starvation hinders the overall growth and decreases the establishment of fruits.

This is why it is necessary to maintain the proper balance, to avoid both nitrogen deficiency and toxicity. EOS Crop Monitoring always stays alert to notice any development deviances on time, enabling farmers to address the problem early and avoid crop losses due to nitrogen deficiency issues.

request a demo
try now
Don't miss the special offer: sign up now and get a gift!
Learn more about precision agriculture:
Media