Objective Determining of the level of winter losses

Today, farmers estimate that 90% of yield losses occur due to extreme temperatures. It’s not only about heat stress or drought, but frost damage has a much more significant impact on crops and may easily go unnoticed till spring or summer. The impact of climate change on agriculture is getting bigger and bigger with each passing year as frosts become only stronger. As for crop protection during wintering, farmers use a specific set of techniques, but as most of them grow high volumes, measures such as using straw covering turn out to be insufficient.

Predicting frost losses will enable farmers to take actions in advance, subsequently increasing farm safety; insurance and commercial organizations will be able to develop a logistics plan as well as any further related actions accordingly.

Let’s consider a field sown with barley in autumn: 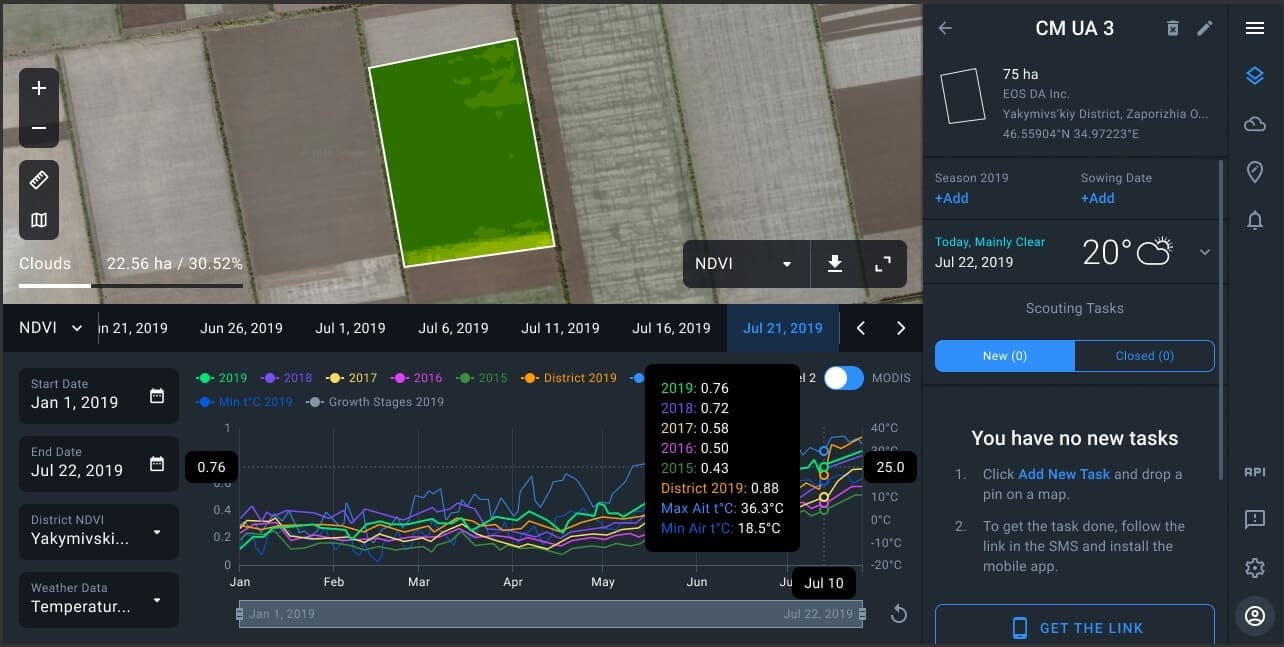 The point of plant death is called “Winter kill” and is predefined in the system so that the user is able to detect the occurrence of “critical” conditions. This parameter is based on a combination of values such as temperature and snow depth. The temperature sufficient for the death of winter crops in this field occurred in February and March.

With the help of EOS Crop Monitoring, it is possible to predict losses and take appropriate measures

Once such conditions occur, the farmer should closely monitor the frosted areas in the spring when germination begins. In the event that the frosts were strong enough, the farmer may decide to plough the fields and sow the problem areas with spring crops. This should be followed by satellite monitoring of crops that were threatened with freezing. However, a wider outreach could be realized with monitoring of problem areas using drones.

Drone and satellite monitoring can be interchangeable as well as mutually complementary.

Managing large fields is a challenging task. Drone monitoring requires a lot of investment, both financial and time. The solution is the initial satellite monitoring of the entire area and identification of the most troubled zones. Further, these zones are monitored by drones, which will help improve the accuracy of decision making.

While using EOS Crop Monitoring and NDVI, areas with potential healthy and frozen plants were discovered. The following measures were taken:

By localizing problems, it became possible to determine the cause of plant death. This technique has been successfully used in four regions for three consecutive years.

try now
Don't miss the special offer: sign up now and get a gift!
EOS Crop Monitoring for other tasks: